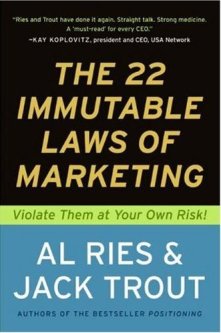 During the holidays, I had the chance to re-read one of my favorite marketing books: The 22 Immutable Laws of Marketing by Ries and Trout.  While many people seem to think that the book is no longer relevant, I was more than a little surprised by how of much of the book I remembered and how much it still applies 15 years later.

Over the years, I’ve frequently cited the Law of the Category: “if you can’t be first in a category, set up a new category that you can be first in.”  The classic example comes from the early solo flights across the Atlantic.  While many people remember that Charles Lindbergh made the inaugural flight, very few of us know that Bert Hinkler was the second person to cross the Atlantic solo.  Counter-intuitively, we all know the third person: Amelia Earhart.  We remember her because she was the first in a new category – the first woman to fly across the Atlantic solo.

Creating a new category is a way of exploiting first mover advantage.  Scientific studies have shown that companies that enter a market first are more likely to succeed than others that enter the same market afterwards.  This advantage stems from the ability to establish technology leadership, to pre-empt scarce resources, and to create high switching costs for the competition. But more than anything else, the advantage stems from brand loyalty.  There are lots of commonplace examples: with virtually no differences in ibuprofen products, the market shares of Advil, Nuprin, and Medipren match the order that they entered the market.

Silicon Valley software start-ups seem fixated on the law of the category.  After one company establishes a new category, lots of copycat competitors pile into the same market trying to benefit from the halo effect.  After a short while, many of the companies recognize that there isn’t room for all of them and attempt to create sub-categories or near neighbor categories that they can become first in. Unfortunately, many entrepreneurs mangle this law by inventing new categories that don’t really exist.  In this case, size does matter.

While being first in category helps, it doesn’t guarantee success. Atari was the first video game, Visicalc the first desktop spreadsheet, and Mosaic the first Internet browser.  None are leaders in their categories any longer.  This is not just a technology phenomenon. Gablinger was the first low-calorie beer but lost the market to Miller Lite.

Why didn’t these products win even though they had first mover advantage?  In my opinion it’s because marketing is not just the battle of products; it’s the battle of perception.  This is Ries and Trout’s Law of Perception which I’ll cover in a subsequent post.

This entry was posted on Sunday, December 27th, 2009 at 9:14 pm and is filed under books, marketing, strategy. You can follow any responses to this entry through the RSS 2.0 feed. You can leave a response, or trackback from your own site.